Happiness to your sheets Shakespeare and Verdi

Happiness to your sheets Shakespeare and Verdi 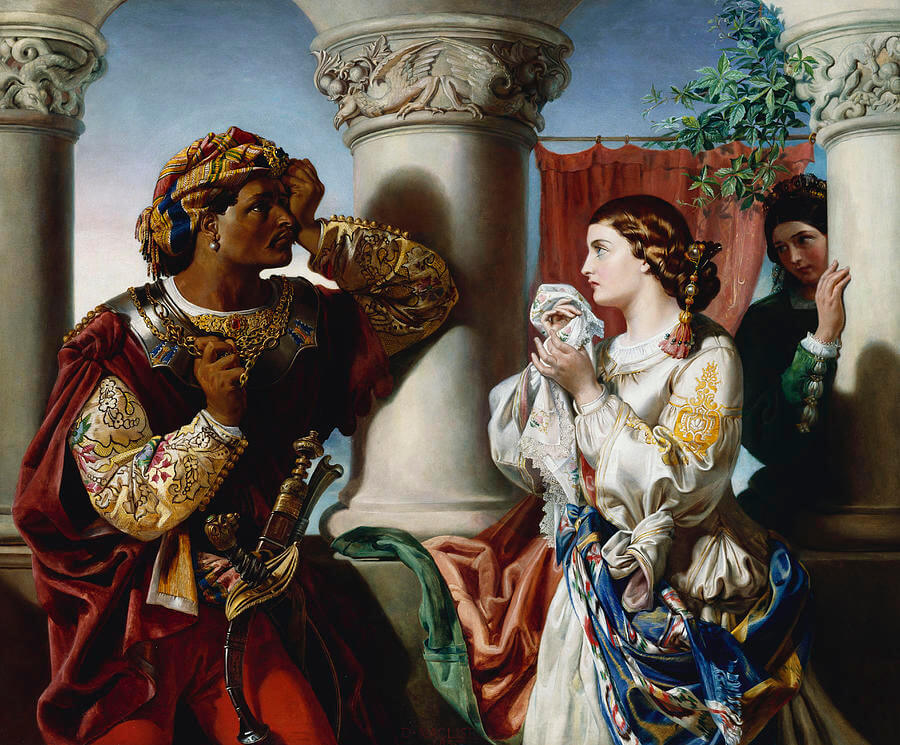 Making the beast with the two Backs

Amsterdam, Feb. 25 2021– Long ago, really long ago, when growing up from a child to a young man, I became fascinated by a comment with a, for me then and at that time, strongly sexual connotation. A comment triggered as a lifelong and equally beautiful experience.

One of those things that made me think about and got a lump in my throat.

It is the comment of Desdemona’s uncle, Othello’s then fiancé and later his wife. The Uncle and Doge of Venice, in Shakespeare’s Othello. It was a then, puzzling to me and intriguing remark about the making of the beast with two backs and a wish for luck on the sheets. [‘ I wish happiness to your sheets ‘]

The grand and compelling masterpiece by the Italian maestro Verdi, based on the equally brilliant and grand play by William Shakespeare, touches on important themes of human life.

A craving for love but where there is also room for jealousy, as well as the mysterious sexuality and racism or the terrible consequences of toxic disinformation.

It’s as if it took place and was recently written in 2021, all in a music form that is enchanting and beautiful.

The opera immediately opens in full action: in a heavy thunderstorm, General Othello manages to moor his ship where he anxiously awaits his arrival. He comes with the news that the enemy has been defeated and appears in passing, capable of calming the storm.

It is immediately clear: Otello is a great leader and an impressive man. The role is notoriously difficult to play. For Otello, a more than phenomenal dramatic tenor is needed, who can sing with great volume as well as intimately small, and can act all shades of his complex character.

But he also has a jealous, short temper, and as a black man in a white community is actually somewhat insecure about himself and also about the love of his wife Desdemona. She always does not get over the misinformation, whispered to Iago in the world.

If by the time she sings Verdi’s Salce and nothing happens, then I don’t know anymore.

In their great duet, however, their love for each other shows constantly, unconditionally and moving, they circle around each other like teenagers in love.

He asks her for a kiss, another kiss, and another.

Verdi completes their happiness and ours. Yet Othello kills his Desdemona less than two hours later.

How is that possible?

He reminds me of a current boreal politician in the Netherlands. The one who recently asked his followers if they would let their daughter come home with a Negro.

Otello’s aide, Iago,has a deep-seated hatred for his superior, who is everything he is not himself: honest, noble, powerful and loved almost everywhere.

But precisely because Otello sees Iago as a confidant, it is relatively easy to achieve his own senseless goal, to destroy a giant and formidable man. Stupid racism?

It is with Iago that racism towards Otello shows his disgusting face, Iago describes him as “thick-lipped barbarian”. Shakespeare does not elaborate on his motives.

In this play, Iago is essentially a devil with unprecedented demons.

But Verdi makes a human being, a person. One of those that could appear in Rutger Bregman’s ‘ Alle Mensen Deugen ‘, ‘ We Are All Alright ‘, but where his brilliant librettist Arrigo Boito also assigns him those more human features.

Inconspicuous, just as if Iago could be your next door neighbor or colleague. However, that is what makes him the devil in his own right.

Despite all his success, Otello still feels like an outsider among the Venetians who once abused and belittled him.

He doubts whether he can hold on to the love of the beautiful, younger patrician daughter Desdemona and is uncertain. Iago knows all this and exploits it unscrupulously. He almost carelessly suggests that Desdemona is having an affair, and knows how to nail that nasty lie deeper and deeper into Otello’s head.

Repeating, whispering, insinuating, eating the systematic intrigues at Otello, until nothing is left of him but anger and finally complete en relentless madness.

A process that is recognizable today as a result of which many hardly recognize the country they come from. Conspiracy. Theory. Gossip. Believe in hot air.

Everyone knows and feels that things are going to end badly and hopes against their better judgment.

It is not until Desdemona is dead that Iago’s machinations come to light.

The moment Otello realizes that he only killed the love of his life for the lies and intrigues has also shredded the hearts of so many of us common citizens.

And even at the end Verdi is not ready yet.

Otello kills himself with a dagger hidden around his wristband. He stumbles dying back to the body of his dead lover.

Their love theme resounds like an almost gone memory, and Otello asks Desdemona begging for a kiss, another kiss, and one more.

The good fortune Desdemona’s uncles prayed for, the happiness to their sheets, has run out. Unnecessarily destroyed by a jealous man, with no other goal than destruction itself.

As if the metaphor of destruction, written so long ago, is more than valid in our contemporary and today’s world.

If you enjoy reading about literature, have a look at Who Am I – How a Woman’s Rights Group goes against a transgender author.