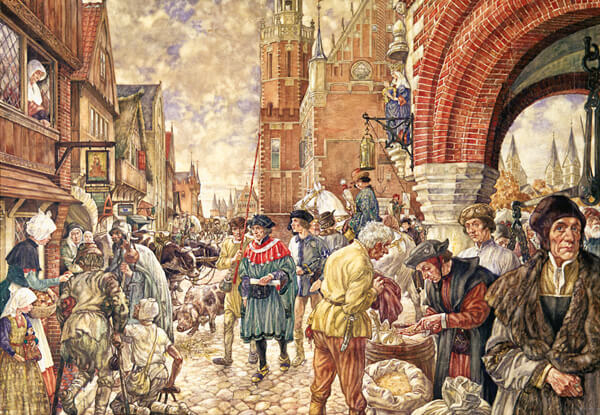 Amsterdam, 24 Feb. 2021 — My good and faithful friend, Friedrich Nietzsche (1844–1900) is, according to many, not only a philosopher of the first order and category, but also a poet and one who thinks in prose.

In his philosophical novel Also Sprach Zarathustra, published in parts now almost some 140 years ago, through the prophet and protagonist Zarathustra, he fights against the oppressive morals of his time. The future she describes is unbearable for many.

In an organized religion, especially Christianity of his day, he sees the oppression that we might recognize today.

He saw in it a repressive power system that tried to prohibit, despise and deny everything that meant “real life”. It “preaches sleep without dreams” and is “tiredness, which wills with one leap to the limit, a death leap, which no longer even has the will to will: it created all gods and back worlds.”

Still, breaking free from church and faith will not automatically bring salvation to man, he warns. Nietsche refers to the “last human”, an apathetic being who has forgotten to dream and strive for greatness and only cares about comfort and ease – now, 140 years later, still a highly recognizable image of humanity.

While Nietzsche was often wrongly called a nihilistic thinker, he was rather someone who warned against nihilism and tried to offer a way out.

Besides the “preachers of death” ( the faith ), he also warns against the oppressive attitude of petty bourgeois people who do not allow others great happiness and success. “They rebuke you for all your virtues. In their hearts they only forgive you for your mistakes! ” About staying true to yourself, he has the following striking metaphor at hand: “You cannot possibly wear a better mask than your own face! Who would you recognize? ”

But what makes Also Sprach Zarathustra a masterpiece is not so much what is said, but the aesthetic, poetic language in which this is done – beautifully translated into Dutch by poet and Nietzsche admirer Hendrik Marsman.

Nietzsche consciously uses the throbbing New Testament language of Jesus in the Gospels. In it he reflects a new way of life for mankind, consciously speaking especially in parables: “Truly, a muddy stream is man. One must be a sea to be able to absorb a flood of mire without becoming unclean. ”

Also Sprach Zarathustra is above all a highly and widely recognized controversial work. First of all, Nietzsche writes the book for a male audience.

The image of women that appears in it can be called quite 19th century, to say the least: inferior and submissive to men.

Second, Nietzsche calls his ideal image of the higher man freed from external coercion the Übermensch, a concept that was later misused by the Nazis for their Aryan racial doctrine. Although Nietzsche should have had none of such ideas – he even broke with his best friend Richard Wagner over his anti-Semitism – adopting this term has often placed him unfairly in a proto-fascist corner.

Admittedly, Also Sprach Zarathustra is full of rhetoric about strife and enmity.

But in the end it is mainly a declaration of love to the free, cheerful person, whose only, real enemy remains the “spirit of melancholy”.

That person wants to move forward, develop further and without looking back on which chains she has thrown off: “Free from what? What does Zarathustra care! Your gaze must tell me clearly: free to what purpose? ”

How that which should be filled in, is up to the ‘reaping and celebrating’ Ubermensch himself, although Nietzsche has ideas in which sphere this should be done: ‘And lost people estimated the day on which there was no dancing. Not once. And wrong was every truth, where no one even laughed ”.

Read also Happiness to your sheets – Shakespeare and Verdi.