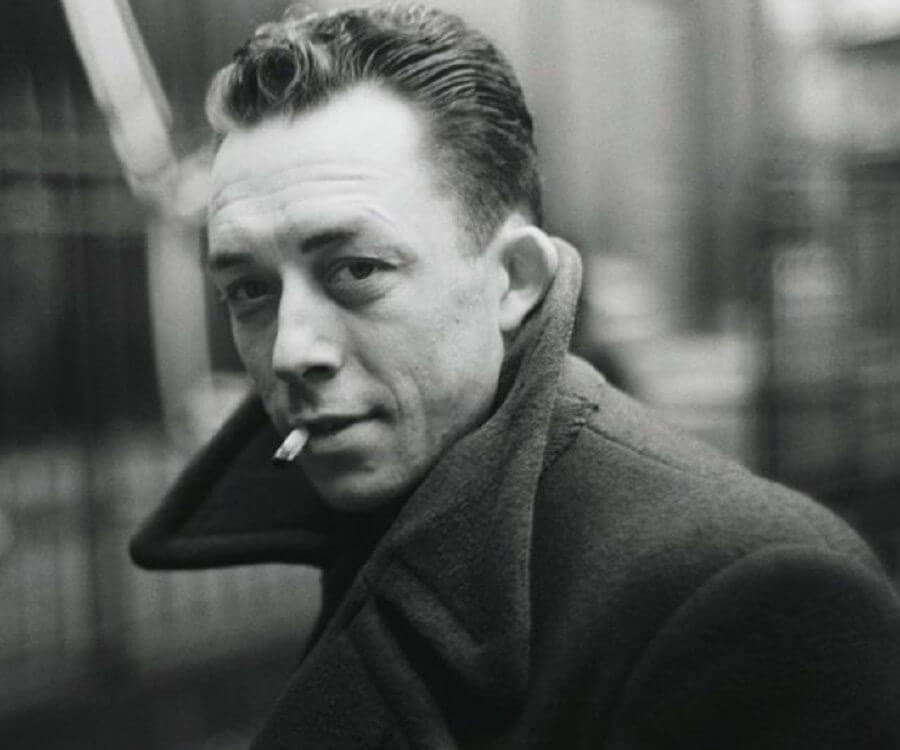 Albert Camus’ Nobel Prize in Literature acceptance speech, given at Stockholm on December 10, 1957. He was awarded the prize “for his important literary production, which with clear-sighted earnestness illuminates the problems of the human conscience in our times”.

When I received the distinction with which your free Academy has honored me, my gratitude was all the more profound as I realized to what extent this award exceeded my personal merits. Every man, and even more so every artist, desires to be recognized. I do too. But it was not possible for me to learn of your decision without comparing its impact with what I really am. How could an almost young man, rich only in his doubts and a work still in progress, used to living in the solitude of work or in the retreats of friendship, not have learned with a kind of panic of a stop that brought him suddenly, alone and reduced to himself, in the center of a raw light? With what heart could he also receive this honor at a time when, in Europe, other writers, among the greatest, are reduced to silence, and at the very time when his native land is experiencing unceasing misfortune?

I have known this disarray and inner turmoil. In order to find peace, I had to settle with an overly generous fate. And, since I could not equal myself to it by relying on my merits alone, I found nothing else to help me but what has sustained me throughout my life, and in the most contrary circumstances: the idea I have of my art and of the role of the writer. Let me just say, with a feeling of gratitude and friendship, what this idea is.

I personally cannot live without my art. But I have never placed this art above everything else. On the contrary, if it is necessary to me, it is because it does not separate itself from anyone and allows me to live, as I am, on the level of all. Art is not in my eyes a solitary pleasure. It is a means to move the greatest number of men by offering them a privileged image of the common sufferings and joys. It thus obliges the artist not to separate himself; it subjects him to the most humble and universal truth. And the one who often chose his destiny as an artist because he felt different soon learns that he will only nourish his art, and his difference, by confessing his resemblance to all. The artist is forged in this perpetual back and forth from himself to others, halfway between the beauty he cannot do without and the community he cannot tear himself away from. This is why true artists do not despise anything; they force themselves to understand instead of judging. And if they have a party to take in this world, it can only be that of a society where, according to the great word of Nietzsche, the judge will no longer reign, but the creator, whether he is a worker or an intellectual.

The role of the writer, at the same time, is not separated from difficult duties. By definition, he cannot put himself today at the service of those who make history: he is at the service of those who undergo it. Or else, he is alone and deprived of his art. All the armies of tyranny with their millions of men will not take him away from his solitude, even and especially if he agrees to follow in their footsteps. But the silence of an unknown prisoner, abandoned to humiliations at the other end of the world, is enough to take the writer out of exile whenever, at least, he manages, in the midst of the privileges of freedom, not to forget this silence, and to relay it to make it resound by the means of art.

None of us is great enough for such a vocation. But in all the circumstances of his life, obscure or temporarily famous, thrown in the fetters of tyranny or free for a time to express himself, the writer can find the feeling of a living community which will justify him, on the only condition that he accepts, as much as he can, the two charges which make the greatness of his profession: the service of truth and that of freedom. Since its vocation is to unite the greatest number of men possible, it cannot accommodate the lies and servitude which, where they reign, proliferate solitudes. Whatever our personal infirmities, the nobility of our profession will always be rooted in two commitments that are difficult to maintain: the refusal to lie about what we know and the resistance to oppression.

During more than twenty years of a demented history, lost without help, like all the men of my age, in the convulsions of time, I was supported thus: by the obscure feeling that writing was today an honor, because this act obliged, and obliged to not only write. It obliged me especially to bear, as I was and according to my strength, with all those who lived the same history, the misfortune and the hope that we shared. These men, born at the beginning of the First World War, who were twenty years old at the time when Hitler’s power and the first revolutionary trials were taking place, who were then confronted, in order to complete their education, with the Spanish War, the Second World War, the world of the concentration camps, the Europe of torture and prisons, must today bring up their sons and their works in a world threatened by nuclear destruction. No one, I suppose, can ask them to be optimistic. And I am even of the opinion that we must understand, without ceasing to fight against them, the error of those who, by an excess of despair, claimed the right to dishonor, and rushed into the nihilisms of the time. But the fact remains that most of us, in my country and in Europe, have refused this nihilism and have sought legitimacy. They had to forge an art of living in times of catastrophe, to be born a second time, and then to fight, openly, against the death instinct at work in our history.

Each generation, no doubt, believes itself destined to remake the world. My generation knows, however, that it will not remake it. But its task is perhaps greater. It is to prevent the world from unraveling. Heiress of a corrupted history where fallen revolutions, techniques gone mad, dead gods and exhausted ideologies are mixed, where mediocre powers can today destroy everything but no longer know how to convince, where intelligence has stooped to the point of becoming the servant of hatred and oppression, this generation has had to restore, in itself and around it, from its own negations, a little of what makes the dignity of living and dying. Faced with a world threatened with disintegration, where our great inquisitors risk establishing forever the kingdoms of death, it knows that it should, in a sort of mad race against time, restore between nations a peace that is not that of servitude, reconcile work and culture once again, and remake with all men an ark of the covenant. It is not certain that it will ever be able to accomplish this immense task, but it is certain that everywhere in the world it is already keeping its double wager of truth and freedom, and, on occasion, knows how to die without hatred for it. It is she who deserves to be saluted and encouraged wherever she is, and especially wherever she sacrifices herself. It is on her, in any case, that, certain of your profound agreement, I would like to defer the honor you have just given me.

At the same time, after having said the nobility of the writing profession, I would have put the writer in his true place, having no other titles than those he shares with his companions in the struggle, vulnerable but stubborn, unjust and passionate about justice, building his work without shame or pride in full view of everyone, unceasingly divided between pain and beauty, and dedicated at last to drawing from his double being the creations he stubbornly tries to build in the destructive movement of history. Who, after that, could expect from him ready-made solutions and beautiful morals? Truth is mysterious, elusive, always to be conquered. Freedom is dangerous, hard to live with as well as exhilarating. We must walk towards these two goals, painfully, but resolutely, certain in advance of our failures on such a long path. What writer, then, would dare, in good conscience, to make himself a preacher of virtue? As for me, I must say once again that I am none of these things. I have never been able to renounce the light, the happiness of being, the free life where I grew up. But although this nostalgia explains many of my errors and faults, it has undoubtedly helped me to better understand my profession, it still helps me to stand, blindly, with all those silent men who only support, in the world, the life that is made for them by the memory or the return of brief and free happinesses.

Brought back to what I really am, to my limits, to my debts, as well as to my difficult faith, I feel freer to show you, in conclusion, the extent and the generosity of the distinction you have just granted me, freer to tell you also that I would like to receive it as a homage to all those who, sharing the same fight, have not received any privilege, but have known, on the contrary, misfortune and persecution.