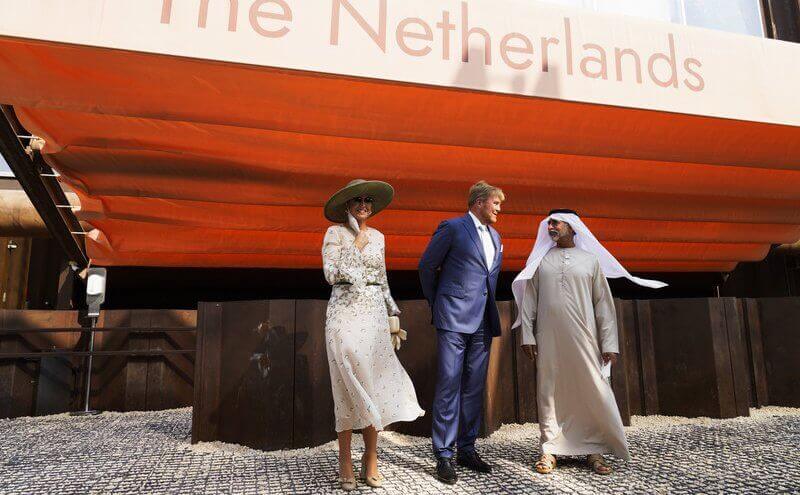 Amsterdam, July 5, 2022– A bright autumn day in Dubai: a clear sky and 33 degrees. Still, Willem-Alexander and Máxima needed an umbrella at the opening of the Dutch pavilion at the World Exhibition on November 3, 2021, so as not to get wet.

The royal couple looked at the eye-catcher of the Dutch entry in the emirate: the SunGlacier by visual artist Ap Verheggen. His machine for making water ran like clockwork: ice-cold rays rained from the roof of the pavilion.This Thursday it was announced that Verheggen will receive the Over Hoop Prize 2021 for his SunGlacier, an annual award for pioneering initiatives at the interface of culture and society. The jury chaired by former entrepreneur and former museum director Christiaan Braun chose Verheggen from 127 nominations. She praises his visionary gaze, his stamina and commitment. The impact of Verheggen’s water machine is potentially immense. If his now patented invention can be applied on a worldwide scale, millions of people in arid regions could gain access to drinking water. It would also make farming possible in places where this is currently unimaginable.

A world of possibilities opens up with his SunGlacier, Verheggen says confidently. “Sun, gravity and air are plentiful and freely available everywhere. They do the work.” My technology must be accessible to everyone who needs it. To explain his invention, Verheggen makes a comparison. “What happens if you put an ice cold can of Coke in the sun? That’s starting to sweat. The water vapor in the air that blows against the can condenses. Water droplets quickly roll down.” Condensing machines are built on this principle: water vapor condenses on flat, cooled metal plates. Unfortunately, in areas with high temperatures, the generated water droplets evaporate almost immediately. Verheggen’s SunGlacier works differently. On the roof of the Dutch pavilion in Dubai, he placed a six-meter-long sea container with the largest SunGlacier that he and his partner Peter van Geloven ever built.

Solar panels provided the energy, intended for a battery, water pump, cooler and barrel.
The SunGlacier is, after all, a water multiplier. He blows outside air through a cold rain shower. The water vapor in the outside air condenses against the cold falling water droplets, which thus increase in volume. The result: a growing waterfall. The cooler and water pump ensure that the water is pumped up again and again cooled to the rain shower. The extracted water can be stored in a reservoir or used immediately.

The SunGlacier in the Dutch pavilion at the World Exhibition produced 1,200 liters of water daily. With support from the Ministry of Defense, Verheggen also built the Droppler 20, a smaller SunGlacier for hot and dry areas such as Mali. This machine, which fits in a flight case, produces up to 30 liters of water per day. Suitable for consumption. The artist himself drinks coffee made daily from water from a Droppler set up in the port of Rotterdam. Now another backpack model for the desert. He is working on that, says 58-year-old Verheggen in a conversation in which he talks about his motivations and the collaboration with multinationals. How did you come up with the idea for the SunGlacier? Ap Verheggen: “From the 1990s on, I regularly visited the Arctic. I was very interested in the Inuit, their ability to make something out of nothing. I made videos and large sculptures there myself. Over the years, I noticed how quickly the climate in the Arctic changed. But if you used the words ‘global warming’ at the time, many people still called it a hoax. In 2009 I wanted to draw attention to the climate problem with my artwork cool(E)motion.
I placed two of my sculptures on a floating iceberg in Northwest Greenland. Because they were equipped with GPS trackers, it was possible to follow live remotely how dynamically that iceberg moved through the melting process.

It was predicted that the process would take four to six years. But because it was suddenly +20 degrees Celsius in May in Greenland instead of the usual -20, the iceberg melted in two months.
“We would be in trouble if climate change happened at the same rate in lower areas, I realized. I hoped to raise awareness for this with yet another work of art. My plan was to use solar energy to create a glacier in the desert. Hence the name SunGlacier. The plan was a sculpture of 50 by 10 and 3 to 4 meters high. Yes, think big, that’s me. That plan started it.” A glacier in the desert? That sounds utopian. „Yes, I was regularly laughed at. But I also met people who became intrigued. Employees of the refrigeration company Engi Refrigerating in Zoetermeer (now: Equans,

ed.) found my idea so interesting that they converted part of their factory into a climate laboratory. Since 2011, the first difficult steps have been taken for SunGlacier. The connection with solar energy did not work well at the time.” What was the first working model? “A fountain that was put into use in 2016 at Museum Beelden aan Zee in The Hague. I obtained the necessary water from the air with solar energy. Thanks also to Peter van Geloven, who had become my technical sparring partner in the field of solar energy. „During that period I attended a conference on climate change organized by the Ministry of Defence.

That is where I came into contact with Tom Middendorp, then commander of the Dutch armed forces. ‘General, we do talk about the impact of drought and actions against climate change,’ I told him, ‘but when are we actually going to do something?’ Middendorp invited us to fly to Mali. We were allowed to try out SunGlacier test installations in a Dutch army camp. In particular, we learned that the existing condensation technology with cold metal surfaces did not work in the Malian heat.

The few drops of water we made evaporated instantly. Then Peter and I concluded that if we wanted to achieve something in these kinds of areas, we really had to work with different technology. This gave rise to our idea to catch condensation drops with a waterfall of ice-cold water.” An artist becomes an inventor? “Indeed. We just did it. And with the help of a new partner, Hugo de Vries, we even managed to patent our invention, a complicated process.

“It may sound like a success story, but we really experimented endlessly. We have now had perhaps about eighty test setups, always with small improvements. Several times we knocked on the door of TU Delft for help to no avail. We were always laughed at and sent away. We also had this problem with subsidy applications. Cultural institutions thought we were too scientific. And in the world of science, I’m a loose cannon.

Why those boxes, I don’t understand?

“When the request came to build a large SunGlacier in Dubai and we got that machine working, I cried like a child. There is really so much that can be done with technology. You just have to dare to go down unbeaten paths. That is why I mainly look for cooperation with students. Young people are more creative. After lectures at many universities, I started talking about cities of the future. I recently recorded the clip for ‘Hero’, a song about the climate problem with the singer Janieck.” What next? “We are going to build an industrial prototype with a Dutch multinational, a machine builder. In addition, we had a fruitful conversation with a company that supplies installations for glasshouse horticulture and wants to use our technology to make greenhouses with closed eco-systems. No, I can’t name names. But they are companies with knowledge and decisiveness.
“Do I want to dream out loud? Hopefully tens of thousands of SunGlaciers will have been sold in five years. We are not going to immediately solve world problems with this, but this invention can help in the long run to relieve the pressure in the field of drinking water and food supply problems. „What those machines will cost is not that interesting.

What matters is that development starts quickly. Elon Musk’s first Teslas were very expensive. Now the electric car is the new standard. My technology must be accessible to everyone who needs it. This week I received a message from a journalist from the Seville area. She was cut off from drinking water, only getting gray water.

She wrote: “I need such a device from you.” And then we are talking about Spain! Due to climate change and population growth, we have water problems in more and more places.” Are you an entrepreneur now?

“No, I’m still an artist. I also make other sculptures. They also have a link with nature. I also consider these water machines to be works of art: they manipulate natural processes.”
Are you going to get rich from the licenses issued?

“I was on the radio recently “, he says. The presenter asked: ‘Then you definitely struck it rich now?’ Then I replied: ‘Yes, that’s right. And in a moment I’ll go out begging again.

” The prospect of getting rich has zero value to me. I see this as a nice adventure. Realizing something of significance in the lee of young people, what could be more beautiful than that?”