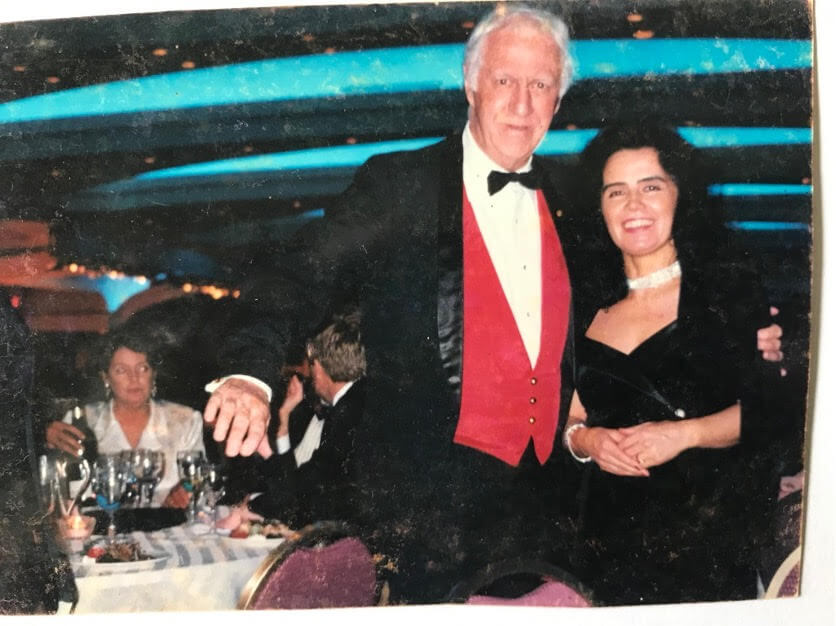 First time I went to Astoria, New York, to the address Sam had given me, the owner of the building laughed at me when we met and I asked for Sam. He grinned somehow and said:

‘ No, no, there is no Sam Summerlin living here. Does he owe you money ?‘

I was surprised and turned a bit insecure.  Sam had moved from an upper-class address on the Upper East side to this cheaper place.

After all this was the address Sam had handwritten down for me at a cocktail party thrown by the Foreign Correspondents Club in New York. Whenever I was in town I attended. Susan Adams director of the FCC was a very good host who had a good grip on her sponsors.

And you never knew who’d show up.

Networking could turn out to be equally surprising and nice.

‘ Hi Sam, how you doing ’, was my standard question after spotting him at those receptions. I never knew too many people around. And although he’d never really and only distantly recognize me and I always saw his eyebrows rising.

I helped, him out quickly. ‘ Anton ‘, I said, from the Dutch Radio and TV in the old days in South America and now in New York.

‘ We used to travel together from Buenos Aires to Chile ‘,

‘ Oh Anton, sure, how you doing, ‘ , he then said, whisking away his grey eyebrows or sort of cleaning up the crumbles on his double breasted navy blue jacket or his light grey pants, in summer or dark grey in the fall or winter. Taking another shot of Scotch.

He always looked impeccable. Tall, handsome, very charismatic and yes a, what was called back then: a lady killer. With, for some, one of those smiles.

I had met Sam in the very late 1960’s or perhaps early 1970’s at the AP building, Rockefeller Plaza in New York after been introduced by George Hawrylyshyn, a Canadian reporter from Ukranian origins.

George from the Rio bureau and at a brief stint and introduction telling Sam that I had been  stationed in Rio de Janeiro for the Dutch media, but got training from our correspondent in Washington DC, KlaasJan Hindriks, with whom I made an occasional trip the NYC, where we stayed at the Edison Hotel on 47th.

Sam was not too impressed.

After all I was very young, a rookie who did not know too much, but eager to learn and he frowned an eye-brow and said: ‘ Well you have to do your homework, if you want to become and belong to the best of us. Listen more than you talk and keep asking relevant questions ‘.

So Sam knew what he was talking about. And I knew that reaching his level, I had to go to places and insist on seeing the people I wanted to listen to, perhaps shed tears, blood and sweat. Spend quality time. Read and absorb valuable lessons.

But with Sam as my inspiration and guide, that should not be too difficult. Sam the great American  journalist, author and Associated Press correspondent from 1949 to 1975. President and chairman of the news service and syndicate at the NYTimes, my hero.

After all, wasn’t he the guy who had met with Mao and had written four books about his journalistic adventures. I mean what makes him so different from me that I could not do  the same things and even innovate some? Or be even more creative?

Talent I have, no doubt. My languages I speak, write and understand well, no doubt. Communication skills in check. Willing, wanting and wishing to burn the soles of my shoes to reach whom and what I wanted to reach.  A certain amount of charisma and yes I’ve been told sometimes a smile as well.

And never take an easy no for an answer.

Sam told me his stories, the stories that had shaped him at High School and College in South Carolina and I listened with due respect.

My admiration and respect for him grew and never ended.

We met in Cannes at the Film Festivals and he told me even more stories. He had developed a movie library and a tv program ‘ Hollywood Stars II ‘ selling content in 70 or 80 countries. He now was a rich and successful entrepreneur and journalist and my respect for him grew even more.

I myself did not do too bad either with my own company Columbus Cine and my own tv program Brazil / 2000 aired on Cable at Satellite Program Network   [ SPN ] from Tulsa Okl. Owned by Ed Taylor and later sold to Ted Turners’ CNN.

Some years later around 2003 – 2004 we met at one of these cocktail parties in New York and when I asked him ritually how he was doing and he said to my surprise that he needed an investor for further developing Hollywood Stars II.

It must have been a year later I told him to come over at the offices of the  Foreign Correspondents Center and I would write him a check. After all I had just received my inheritance and still had money.

He arrived at 10 o’clock sharp and without asking questions or signing a document I gave him the requested amount of money.

The next week or so  he asked me for some more and I gave it to him, this time after signing some paperwork. I helped him out selling his program in several countries around the world thinking learning the trade of marketing, sales and distribution in the film industry.

At that time I was introduced to Jeff C. from a major distribution studio in Manhattan. That is where I learned some of the key ingredients of film distribution. No question.

About a year later Sam asked me to buy stock in Hollywood Stars II and so I did. I did not bother to research the company, but was a 40% stakeholder.  My trust and respect was unlimited. My business skills in financials: zero.  The only thing I knew I could do was in travelling selling the program worldwide.

So when at last, I met with him in Astoria NY basically lying on a bed, dirty and smelling very bad, taken care by two Caribbean nurses at the right address around the corner of the place he had written down for me the first time, he said he was not really sick.

Nevertheless I visited him some four or five times. He said he had just weakened enormously and somehow we managed a lunch at a Deli around the corner. He had just a piece of cake. He called me the best man ever had worked for and with him, his soldier number one. But his voice had weakened.

He had given me the address in New Jersey where his journalistic belongings had been kept. All of his 35 mm shows, archives, personal letters and the like. Going there with one of his cronies, I now also got his mail and read letters about his eviction from the prestigious Upper East side place to this thing in Astoria.

I wrote to Claire, his daughter in San Diego, who asked me literally not upset her Dad too much, as he was dying and to Anthony his son in Washington DC who never bothered to write back.

My thoughts about the old days in Argentina, New York and Cannes came back with a profound sadness as my admiration and respect for him was not fading but somehow, watching him struggle, watching him fight the inevitable death grew strangely stronger.

I wrote to the AP looking for helping him as well to the Foreign Press Club. The answers were not satisfactory.

On the other hand I looked up a media attorney, Carl van der Sandt, and wanted to hire him, but could not afford him.

So I basically gave up to get my money back,  forgiving him his con acts. His con acts that blew me away.

Forgiving myself for blowing away part of my inner self. Stupidity, ignorance and blindness induced by trust, respect and admiration.

American Reporter and journalist, author and AP correspondent from 1949 to 1975. President and chairman of the news service and syndicate at the NY Times.