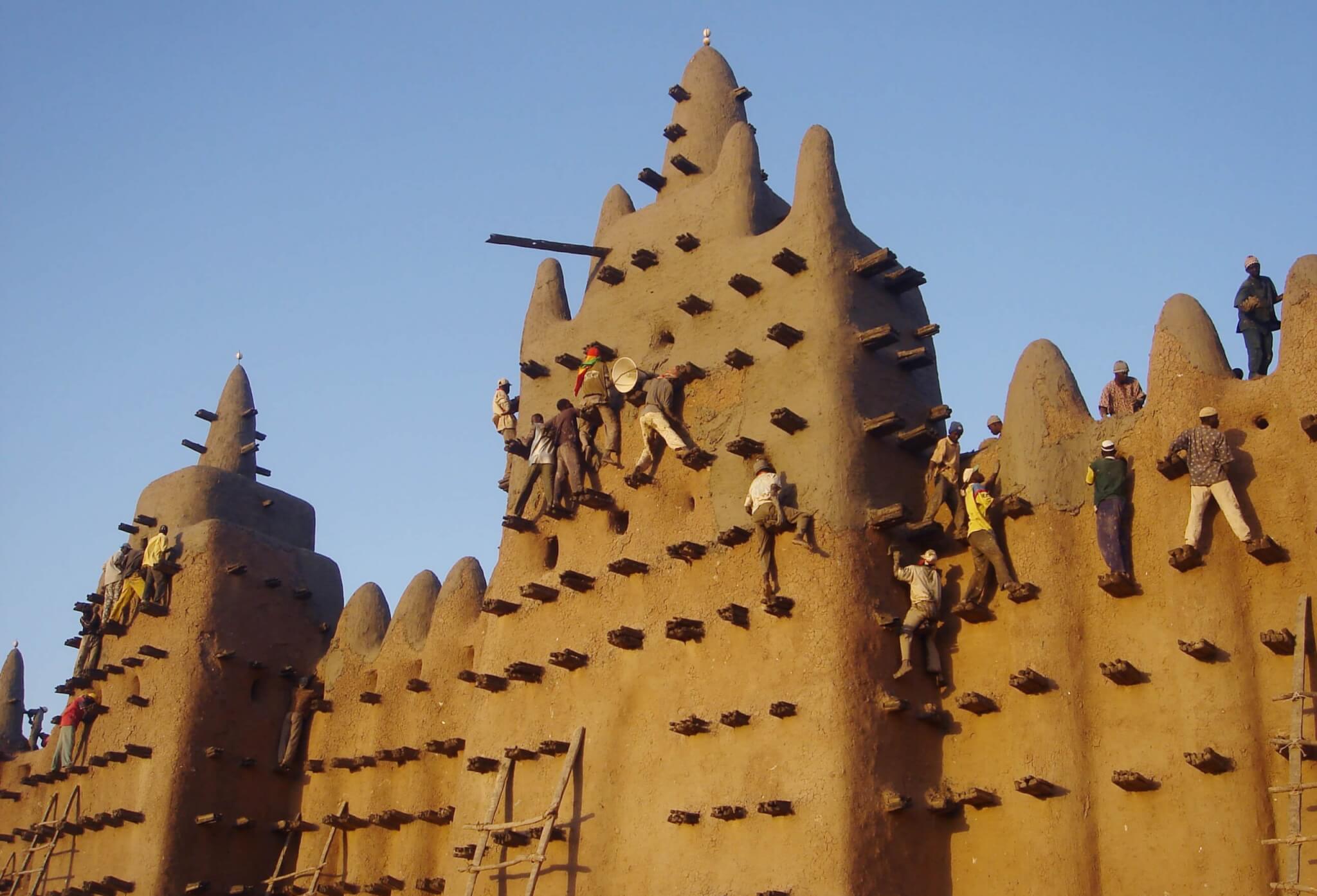 Centre of the world

Amsterdam, September 12th 2021—Ag Mohamed Ali initiated travellers into Timbuktu’s secrets. He took them to the private family libraries that still held manuscripts from Timbuktu’s golden age – biographies of the Prophet Muhammad on pages of gold leaf and scientific treatises from the great Islamic scholars of the day.

He showed them the Dyingerey Ber Mosque, where no-one has dared to open an ancient palm-wood door since the 12th Century; when the door opens, a local legend warns, evil will escape into the world.

As he shared the stories of Timbuktu with visitors, Ag Mohamed Ali came to understand the outside world’s obsession with the city. He watched as tourists tried to reconcile Timbuktu’s storied past with the modern sand-blown streets and ramshackle mud dwellings. He took them to the markets where camels still arrived bearing slabs of salt from the deep-Saharan mines of Taoudenni. And he hurried them to shelter as the harmattan, a red desert wind, turned the sky dark in a blizzard of sand.

As a guide, Ag Mohamed Ali made friends from around the world, and he visited some in Europe. It was, to him, an alien world, just as Timbuktu remains for many around the globe.

The first time I was in Europe,” he said, “and I saw water just lying on the ground, I thought ‘these people are crazy’.” And everything moved at a speed that was unthinkable in the Sahara. “In the desert we have infinite time but no water,” he said. “In Europe, you have plenty of water but no time.”

And yet, even so far from the desert, Ag Mohamed Ali found a connection:

Ag Mohamed Ali’s travels also helped him understand the appeal of Timbuktu, because Paris and Barcelona were as unbelievable to him as Timbuktu is to much of the rest of the world. He went to a football match at Barcelona’s Camp Nou stadium. “In the one place there were more people than in all Timbuktu,” he remembered. He would later found a Timbuktu chapter of the FC Barcelona fan club.

When travellers wanted to see more of the Sahara, Ag Mohamed Ali took them to deep-desert Araouane, a sand-drowned town 270km north of Timbuktu. To get to Araouane, travellers must cross the Taganet sand sheet, which stretches, uninterrupted, to the far horizon. For the last 100km, there isn’t a single tree.

Araouane itself has the appearance of a shipwreck. A number of its buildings have disappeared beneath the sands. Many of the houses that remain, even a mosque, lie half-submerged by the dunes that envelope the town. For weeks on end, the wind blows without respite, and sounds like ocean waves breaking on the shore. Women carry water from the well, leaning into the wind. Without the wells, life would be impossible here; sometimes it doesn’t rain in Araouane for decades. Sand is everywhere, and nothing of any value, save for a single, forlorn wild date tree, can grow here.

And yet, for the tourists who visited there was undoubtedly more to it than that. There was something here that produced a sensation akin to exhilaration. It was the awe of vast skies and big horizons. It was the intimacy of lantern light flickering on mud ceilings as Ag Mohamed Ali told stories of salt caravans lost in sandstorms, stories that told of the uncanny ability of desert guides to find their way home in a world devoid of landmarks; sometimes they did this by tasting the sand or assessing its colour. It was the sand ridges perfectly sculpted by ceaseless winds, or the runic patterns written by wind on sand. And in the delicious remoteness lay an austere, end-of-the-world beauty.

Even as conflicts across North and West Africa have prevented visitors from coming to Timbuktu and Araouane for now, Ag Mohamed Ali wouldn’t change where he lives for anything. “When I am in the desert, I feel like a free man. I feel safe and I am never afraid. Here I can think. Here I can see everything. It is who I am. I never want to leave. It is my home.”

Anthony Ham is a writer and journalist living in Madrid