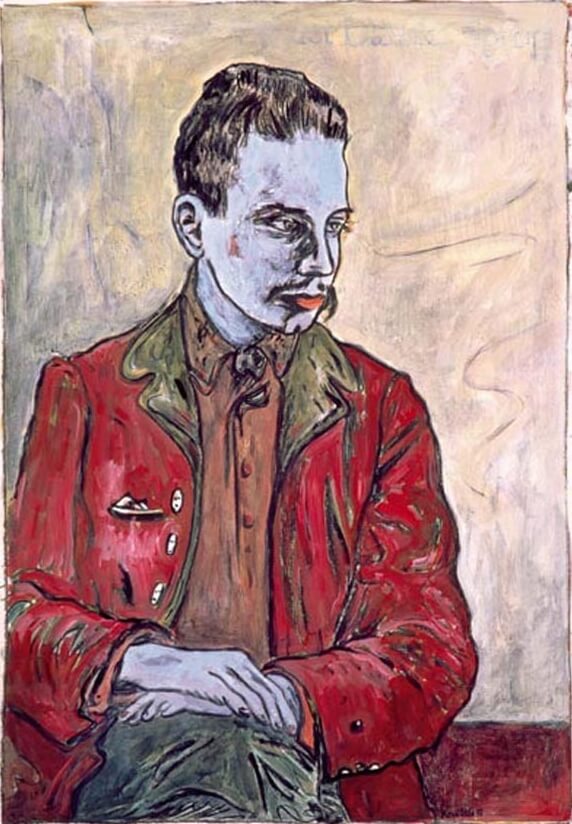 Amsterdam, June 30 2021–  “Spiritually speaking, I stay miles away from my bookcase when I write,” says Stefan Hertmans. “Yet reminiscences of other literature haunt my books, quite unconsciously and unintentionally. You can find traces of Rilke’s The Diary of Malte Laurids Brigge in all my prose work.”

It is his first work of fiction since the acclaimed novel Naar Merelbeke (1994). Hertmans has lived in Ghent almost all his life; there he teaches professional literature and art agogics at the Academy of Fine Arts.

He has been living on the outskirts of Brussels for two years. We meet in the lounge of the Brussels Hotel Metropole, a location that also appears in his new book: one of the main characters `walks into the immense marble hall’ and `wants to sit in one of the wide leather armchairs’.

At Ghent University, where Hertmans studied Germanic philology, he was introduced to Die Aufzeichnungen des Malte Laurids Brigge (1910), a novel in diary form by Rainer Maria Rilke (1875-1926). In it, a young poet describes his experiences in Paris at the beginning of the last century. Hertmans:

,A legendary professor worked at that university, Herman Uyttersprot (1909-1967). His spiritual radiance was still noticeable when I was studying there. Uyttersprot published Prague cachet in 1963, which is about Rilke and Kafka. That book, which spoke a very personal and penetrating vision of Rilke, aroused my interest. At the time, Rilke was very old-fashioned, and after that he came back into fashion. That is his fate. I’ve also had periods in my life when I thought, now I’ve had it with old Rilke.

I first read Malte Laurids Brigge in German, around 1978. At that time I was already working on the first version of my debut novel Ruimte (1981), which took me seven years to complete. I was so naive and ambitious that I wanted to make a book that had its own form. I regularly wrote to Ruimte in an apartment on the coast in Knokke-Heist. It was a very old-fashioned apartment, with floral wallpaper on the wall, and there I found one book, Malte Laurids Brigge in the beautiful translation by Binnendijk and Brunt.

It’s a poet’s prose. It had a lot of influence on my debut, also on my later prose work. When I read this book now it strikes me how contemporary it is, Rilke’s way of editing, making collages. The book has no intrigue and that’s why it’s so intriguing – many books today have too much intrigue. Rilke leaves large gaps in his story, and I think that’s very important when writing. You shouldn’t be too diligent as a writer, don’t want to fill in everything. And the way he talks about death is impressive. There’s quite a bit of death in Als on Day One, and I was surprised when I re-read it to see how many death scenes there are in Rilke’s book, four or five.

Rilke must have been very lonely in Paris at first. It is known from psychology that people who feel lonely begin to think about death.”

So Hertmans sees Malte Laurids Brigge as an autobiographical work?

It’s a kind of existentialist program that Rilke drew up for the rest of his life. If you know anything about Rilke’s life, you will see him in the book, a timid young man from Prague who moves to Paris, not yet very familiar with French. An outside world in which another language is spoken is always more threatening. Rilke wants to get to know it all.

You have to imagine that young guy who walks into the Louvre and gets totally overwhelmed. He has a very great sensitivity to impressions, and the impressions he gets from paintings are as intense and real to him as the impressions he gets in the streets of Paris. He is the outsider, far from being the famous poet who visits noble families and lets himself be celebrated.

The vibrant intellectual life of Paris must have done him a lot. He discovered Manet, Cubism, Rodin, Cézanne. You have to imagine Rilke as a writer who, if he were alive today, would be completely interested in the most contemporary artists. He was very modern for his time, although, on the other hand, he is full of old-fashioned traits, such as his bourgeois interest in nobility; he is of Proust’s generation. I know very well the naive atmosphere of the middle class, where Rilke comes from. Many writers come from the small middle class. I think it has to do with the hope for a different, better life and the lack of a fixed social frame.

In the working class people are very defined, just like in the upper class. In the twilight zone in between, some look for a better life of experience, a cultural life.”

At the beginning of his career, Hertmans was criticized for writing too postmodern, too bizarre, too incomprehensible. His work seems to have become somewhat more traditional since then. Hertmans: ,,For the author himself, the change is less spectacular, because you still have the illusion of your continuity.

Telling has become more direct, I tell more and more unabashedly. But I’ve always been interested in this great motif by Halte Laurids Brigge, the hope that the artwork also shows the experience of another life.

I took other works of art as a starting point for writing because in them I could find another way of existence.

A term like ‘intertextuality’ is often used when it comes to my work, and I always have the feeling that people are missing the point of what it really is all about. The lyrics vibrate towards each other because of those kinds of experiences that Rilke is talking about.

,The first thing Rilke taught me is on the first pages of Malte Laurids Brigge: `I am learning to see. Yes, I’m starting to see. It’s still going bad. But I want to use my time well’. I also often think of the beautiful passage about writing poems: ‘Verses are not, as people think, feelings, they are experiences’.