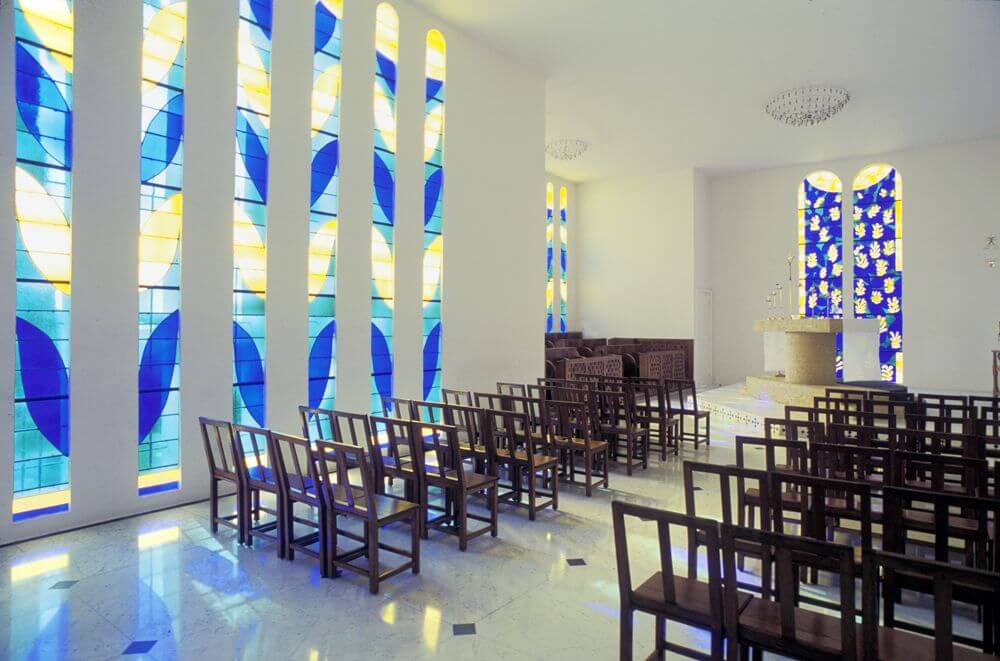 The Chapel in Vence

Amsterdam, August 14, 2021–Don’t beat around the bush and we’re certainly not going to lie to each other, but when we visit the Chapel of the Rosary in Vence, near Nice on the Riviera in  Southern France, it’s not necessarily out of love for sacred art.

It is rather and more to look for and of course also to find something, which we have been looking for for so long. Not that we have lost it, but rather to meet the perfection of ourselves and to find an answer to the question of who you really are and what you do here. Because after all, those are the important questions in life that should be answered in order to make it perfect. And the why, of course. The first time was in the early 1990s, a terribly hot summer. An outing during the hectic pace of the Cannes Film Festival.On the heights of Vence in the Alpes-Maritimes, at the foot of the Baou des Blancs, as the hills in Provence are called, the small building occupies quite a modest place.

White walls, a wrought iron gate. Only blue glazed tiles gave it a bit of character. But the place was safe for anyone who wanted to escape the madness of everyday life in meditation. The camp boss had praised the place to the students in a daze. “It was Henri Matisse who designed it”, he said, “Go especially to the chapel and its freshness,” he rattled on. And we told ourselves that we would wait for the beach and think about and solve the problems of everyday life. Matisse an open book?

Thirty years later, the memory of an aesthetic shock remains, violent because the weather is as unexpected as it is breathtaking. Imagine: white everywhere, on the ceiling, on the walls, on the floor. Stained glass windows of intense azure blue, from which acanthus leaves sprout, dressed in yellow and green. It is impossible and the result is that it is better to keep quiet about it. There aren’t enough superlatives to describe the emotions that bring you closer to yourself. You can swallow those emotions, try to suppress or hide the tears, but well, exaggerating too much is not the intention.Silhouettes, simple black lines on immaculate earthenware tiles, adorn various walls. There is Saint Dominic, founder of the Dominican congregation, the chapel belongs to the Dominicans, a Virgin and Child, surrounded by stylized flowers, Christ on his way to his crucifixion. The designs are refined, the light splashes over the two naves. It must be even more beautiful at sunset, we tell ourselves. There’s no other way and I haven’t even mentioned the sunrise yet.

It is a clinic of the soul, which gives you insight into your own flaws and failures, but also hope for recovery in the future and especially cleansing.

Henri Matisse suffered from cancer and was tired when he began his research work for the chapel of the Rosary in 1947. He embarked on this adventure at the request of Sister Jacques-Marie. Before entering the monastery, the Dominican was the nurse of the artist, operated during the war and needed constant care in those days. An intense friendly relationship: the young woman posed for the master several times. Matisse may not believe in God and spends most of his days in bed, he cannot refuse the invitation and enthusiastically embarks on the project, which he sees as a clinic of the soul. Mozart, Albinoni, Aaron Copland whiz through his head and inspire him. Sister Jacques-Marie, Dominican nun, Matisse’s girlfriend becomes his muse.

For four years, the painter worked without interruption from his studio in Cimiez on the hills of Nice.

He learns to draw with a meter-long bamboo on which he attaches a feather or charcoal. With the object he can draw his black lines on large wall panels while lying or sitting. Because he really can’t. He’s exhausted and exhausted. But, he says, he also enjoys turning his gouache cutouts into stained glass. This sudden and unstoppable passion gives way to a kind of adoration early his friends, such as Picasso or Aragon.

“When we finally come to power, we’ll turn your chapel into a museum,” a poet told him. Matisse will have it written in his will that this place is reserved for the practice of worship.