Warmest Tent on Earth – Pitching in the Siberian Arctic Winter

Warmest Tent on Earth – Pitching in the Siberian Arctic Winter 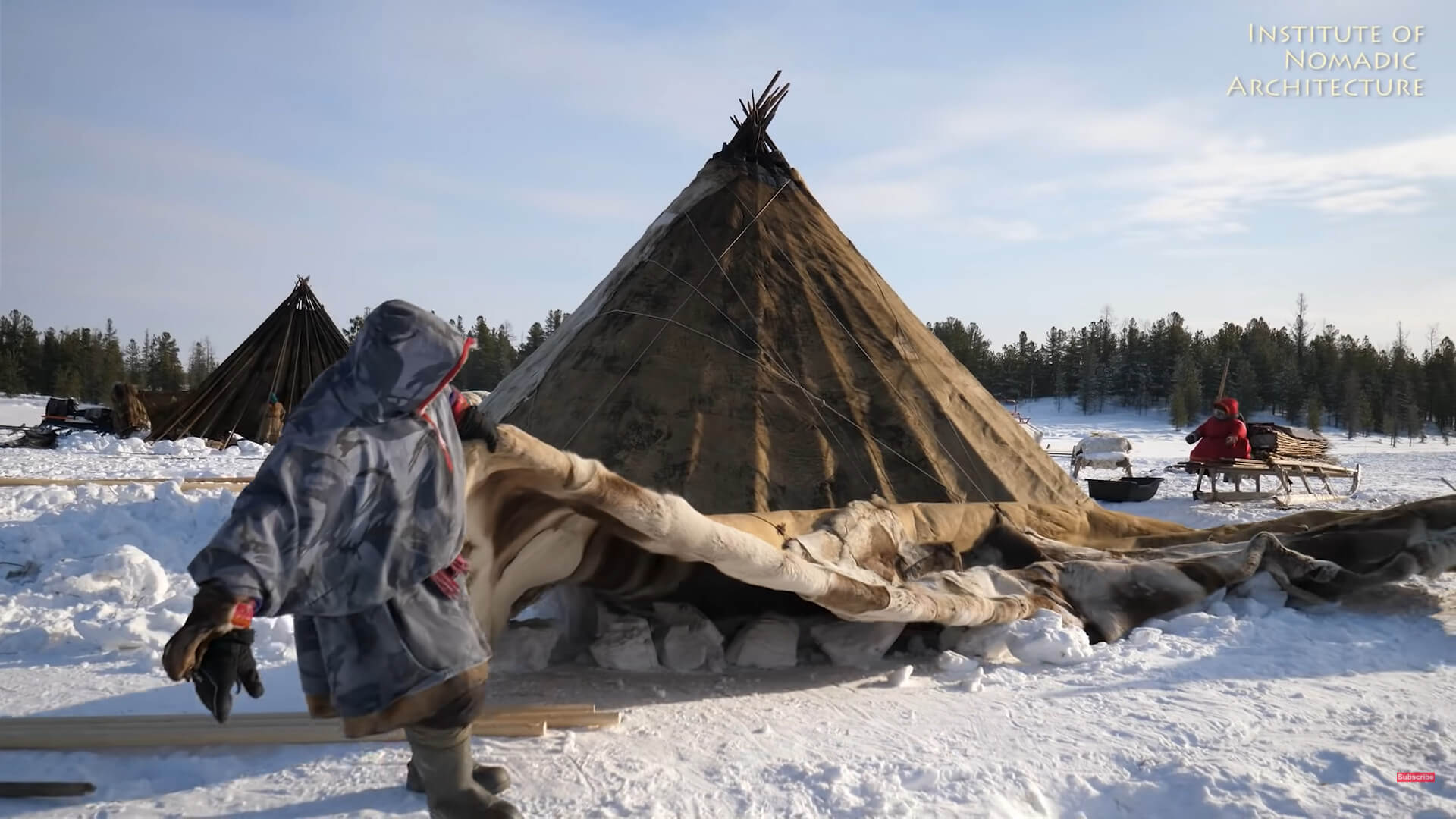 The Nenet reindeer herders need to move their tent every few days throughout most of the year. Every time they migrate they must pack the whole tent away, drag it across the tundra on sledges, and erect it again in a fresh place, sometimes in temperatures of minus thirty degrees. Survival depends on working together as a team. After staying in the wooded taiga for two months they start to migrate north following the ancient paths of migrating reindeer (caribou). In four months they will travel up to 1200km and must pack and move every three to five days to keep up with their herd. They must reach their summer quarters before the snows melt and flood great rivers with icy waters too cold and deep for the calves, born along the way, to cross.

Behind the tent an invisible line extends out into the tundra. It is called the sawei line, and a woman cannot cross it. It will bring bad luck to the tent. It was hard for them to explain exactly why, it is much stronger than a superstition and is connected to the spirit pole that stands at the back of the tent. This pole is sacred and a woman cannot cross underneath it either, and only a shaman may sit in this holy place. The origins of this are a little lost, there may be practical reasons, for example the back of the tent is traditionally where the men work, often together, so they have to be able to move about freely, but there are often two families in a single tent, so maybe one day the women just agreed territories to stop tripping over each other.

Maybe it has such a mundane origin, or maybe there are real spirits that come up to the tent from behind and would bring harm to any women caught in the wrong place. If several tents pitch together, their lines must not cross either, so they tend to camp in a straight line to avoid this. In answer to the many questions – on personal hygiene, everyone washes using a bowl of soap and hot water, just like most of our grandparents did before everyone had pipes and taps. There is no toilet in the tent as some have suggested, they find a spot a few hundred metres away. They are not pitching on a lake but a small mound where the snow blows a little thinner, Gas companies have been in the area and gave away snowmobiles as part of land access negotiations. Also sometimes there are competitions with them as prizes, sometimes they sell a load of reindeer and buy one. Most families now have at least one but the reindeer are still used a lot. Yes, they use a sled to go to town, or trading posts to buy groceries. I wanted to catch the entire process, but have edited it down a little from the 40-45 minutes it takes to get from the open snows to a warm cosy home.