The Moving Correspondence of Albert Camus and Boris Pasternak

The Moving Correspondence of Albert Camus and Boris Pasternak 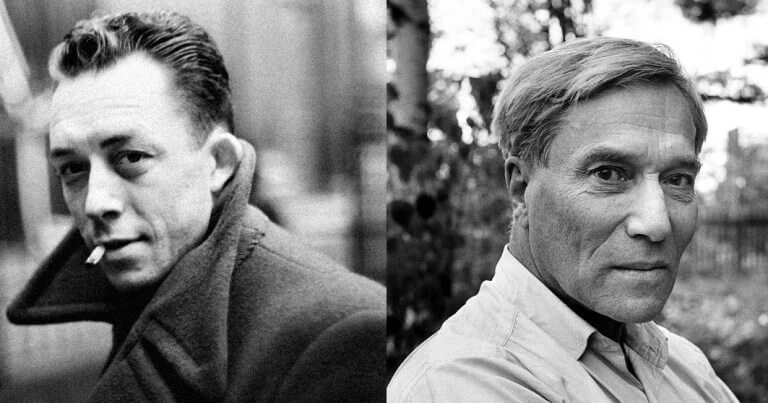 A Cross-Cultural Bridge of Kinship and Mutual Appreciation

Months after Albert Camus (November 7, 1913–January 4, 1960) received the 1957 Nobel Prize in Literature — which prompted him to send a beautiful letter of gratitude to his childhood teacher — he wrote to the great Soviet poet and translator Boris Pasternak (February 10, 1890–May 30, 1960). Camus had grown enchanted with Pasternak’s work for the very reasons — intellectual elegance, critical thinking, an independent socialist-hued spirit — that had made the Soviet government keep a censorious eye on the Russian writer and progressively threaten his civil liberties.

No stranger to unlikely friendships, Camus was reaching across the Iron Curtain, across language and culture and politics and age, with a largehearted offering of appreciation and encouragement to a man he had never met but who he felt deeply was a kindred spirit. Pasternak, almost a quarter century Camus’s senior, responded with a wonderfully generous mirroring of admiration.

Their correspondence, reminiscent of the virtuous cycle of mutual appreciation between Thomas Mann and Hermann Hesse, is included in The Norton Book of Friendship (public library) — that forgotten 1991 treasure edited by Eudora Welty, which gave us Welty’s warm wisdom on friendship as an evolutionary mechanism for language.

On June 9, 1958 — shortly after the French publication of Pasternak’s Doctor Zhivago and mere months before Pasternak himself was awarded the Nobel Prize for Literature, which Russia’s humiliated Communist Party forced him to decline — Camus writes:

René Char, who is my best friend, gave me your address because he knows the friendship and admiration that I have long felt for your work and the man whom one feels living within. I just wanted to send you a small text whose only importance is that of a far-off, but faithful, sign with regards to you. There are a few of us in France who know you, who share your life, in a certain way. I, who would be nothing without the Russian nineteenth century. I find in you once more the Russia that nourished me and gave me strength. It is false to say that frontiers do not exist. They do exist, temporarily. But at the same time there exists a force of creativity and truth uniting us all, in humility and in pride at the same time. I never felt this more than while reading you and that is why I would like to express my gratitude and my solidarity. I send warm wishes to you and yours, for your work and your great country. I shake your hand.

Seventeen days later — a lapse likely due to the heavy surveillance of foreign correspondence in Soviet Russia — Pasternak sees Camus’s generosity and raises it in a beautiful letter he leaves unsigned, in case it falls into the hands of his government censors:

I can hardly believe my eyes, writing to you, Camus. A new page has opened in my life, that of having acquired the pretext, the right, the chance to tell you my delight and my gratitude for the special nuance in the play of today’s universal thought, [to tell you] that it is owing to you.

I rarely have the time to read what I like and what interests me. Kafka, Faulkner, still not read, wait for me to take them from the library shelf. Remembrance of Things Past” is broken off at the end of “Sodom and Gomorrah.” I exult. I congratulate you for writing a prose whose reading becomes a true journey: one visits the places you describe, one experiences the situations related, one feels them for the main characters… My new friendship, if I dare say so, with you … is an unspeakable happiness, and enchantment, a fairy tale. I catch the inconceivable breath of the garden at dawn. I want to surprise the mystery of the green eclipse of the dense foliage, and I think of René Char, who is all that. Or else I meditate on the absolute originality of art and on what is the task of art, rather than philosophy — seizing the essence of life and saying it palpably… And you are anxious about what can happen to me and you forget that no price is enough for this new kinship which is infinitely worth being lived and even suffered for. Thank you, thank you for everything.

When Pasternak died of lung cancer two years later — less than five months after Camus perished in a tragic car accident with an unused train ticket in his coat pocket — his funeral was announced via guerrilla postings on the Moscow subway and throngs of unflinching admirers risked trouble with the KGB and the Soviet Militia to travel to the service held at Pasternak’s country cottage.

Complement this particular fragment of the wholly heart-expanding Norton Book of Friendship with Isaac Asimov’s fan mail to young Carl Sagan, Charles Dickens’s letter of admiration to George Eliot, and teenage James Joyce’s touching letter to Ibsen, his great hero, then drink in Camus’s sympathetic wisdom on strength of character, the art of awareness, what it means to be a rebel, and happiness, unhappiness, and our self-imposed prisons.