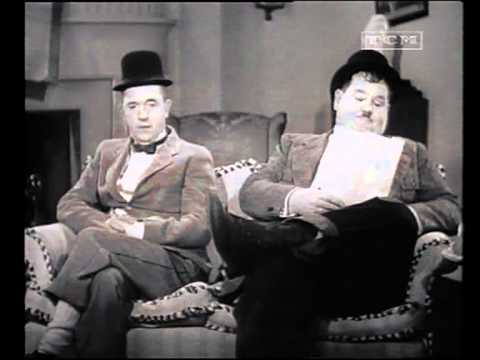 PICK A STAR for once finds Laurel and Hardy making a guest appearance in a film that’s rather enjoyable even when they’re not on the screen. It’s no masterpiece, to be sure, but at least you don’t find yourself checking your watch or reading a book while waiting for Stan and Ollie to do their turn. What excuse there is for a plot (sisters head to Hollywood to try their luck in movies) merely serves to connect a series of chance-encounters-with-stars vignettes. There’s some decent music, a few Busby Berkeley-style production numbers, some nifty special effects (for 1937, anyway), and leading players who were actually talented and engaging.

Laurel and Hardy have two five-minute sequences, both a bit uncharacteristic. In the first, Patsy Kelly is visiting a movie set where The Boys are filming a scene in which they portray Mexican bandits. A clean-shaven James Finlayson plays their director (“When do I act dumb?” asks Stan) for this sequence which ends with a bottle-breaking battle with old foe Walter Long (looking like he’s dropped a good 50 pounds in the three years since his last appearance with L&H). At the conclusion of the scene, Stan and Ollie step out of character (somewhat) to give Patsy a demonstration of breakaway bottles and wind up knocking themselves out with real bottles.

The second scene is an isolated vignette which has Laurel and Hardy ad-libbing some musical nonsense. Stan plays old tunes on a toy trumpet, while Ollie tries to top him by playing the world’s smallest harmonica. Ollie swallows his tiny instrument, and Stan finds that he can play tunes by pressing Ollie’s belly in just the right spots.

In my opinion, this is one of the best L & H guest appearances. It’s the second of two from the film Pick A Star (1937) starring Rosina Lawrence. It makes me laugh every time. The tunes, the facial expressions, the trumpet – and that tiny harmonica! Brilliant.