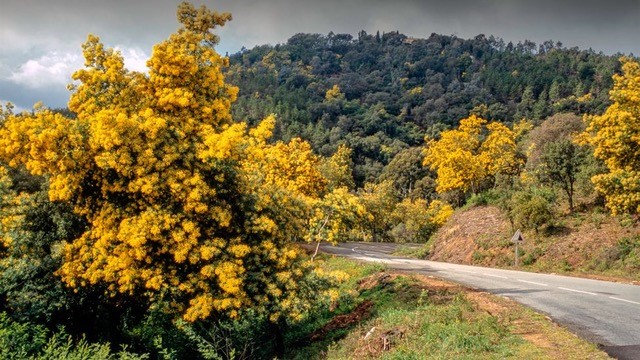 As the snow-capped peaks of the Maritime Alps faded into the distance behind me, I followed my guide Maddy Polomeni further along a corridor of golden mimosa blossoms as we hiked towards an abandoned quarry in the Massif de l’Esterel mountain range. Although it was the latter end of the flowering season, there was still an abundance of blooms along this trail, unlike many of the other mimosa circuits higher up in the peaks behind us.

The correct term for each bud is glomerulus, but “pom-poms”, as Polomeni calls them, felt a more fitting name for the fluffy, featherlight balls that filled the late February air with the sweet aroma of marzipan.

I feel like spring is already here,” she said.

These rocky ranges behind Mandelieu-La Napoule, the coastal town west of Cannes in southern France, are home to Europe’s largest mimosa forest. For six years, Polomeni has been one of the few registered guides leading small groups along walking trails that criss-cross this dry Mediterranean landscape. Along the way, she’s become a point of reference for travellers like me who are following La Route du Mimosa, a 130km road trip that starts in Bormes-les-Mimosas, 35km west of Saint-Tropez, and finishes in the perfume-scented town of Grasse in the Cannes hinterland, an itinerary best travelled between January and March when the region breaks out in giant brushstrokes of rich yellow.

Known as wattle in its native south-eastern Australia, mimosa was introduced to the French Riviera by British aristocrats who flocked to its resort towns in search of winter sunshine. Making its first appearance around 1880, the Acacia dealbata (or silver wattle) they brought in their luggage quickly took to the acidic soils of the French region’s mountainous western terrain. “Having found the same growing conditions as back in Australia, the plant spread,” horticulturist Julien Cavatore told me.

Pépinières Cavatore, his family nursery in Bormes-les-Mimosas, stocks more than 180 species of the plant; it has been recognised as one of the country’s finest collections by the Conservatoire des Collections Végétales Spécialisées (a French association modelled on Britain’s Plant Heritage).

One of the things I love most about mimosa is that it blooms during a period of the year when you don’t get any other flowers,” Cavatore said.

The Route du Mimosa was created in 2002 along existing secondary roads, and while I was surprised to find that it isn’t obviously signposted, a brochure is available in local tourist offices (and online) that serves as a guide to the various waypoints and activities. Cavatore said that people often ask why there are not “huge forests of mimosa” as they head off from Bormes-les-Mimosas – in fact, for much of the early stages of the drive, the landscape is the dusty greens and winter browns typical of the season. As he explained, however, the route is more about a theme, a showcase of eight towns and villages that have each developed cultural ties to a plant that has become a symbol of winter on the French Riviera.